Axence has been providing professional solutions for the comprehensive management of IT infrastructure for companies and institutions all over the world for more than 17 years.

Our flagship product, Axence nVision®, responds to the key needs of IT administrators and security officers in the scope of network and user monitoring, hardware and software inventory, remote technical support, data protection against leakage and analyzing productivity at work. It enables the management to optimize the operating costs of any IT infrastructure, regardless of its size.

years on the market 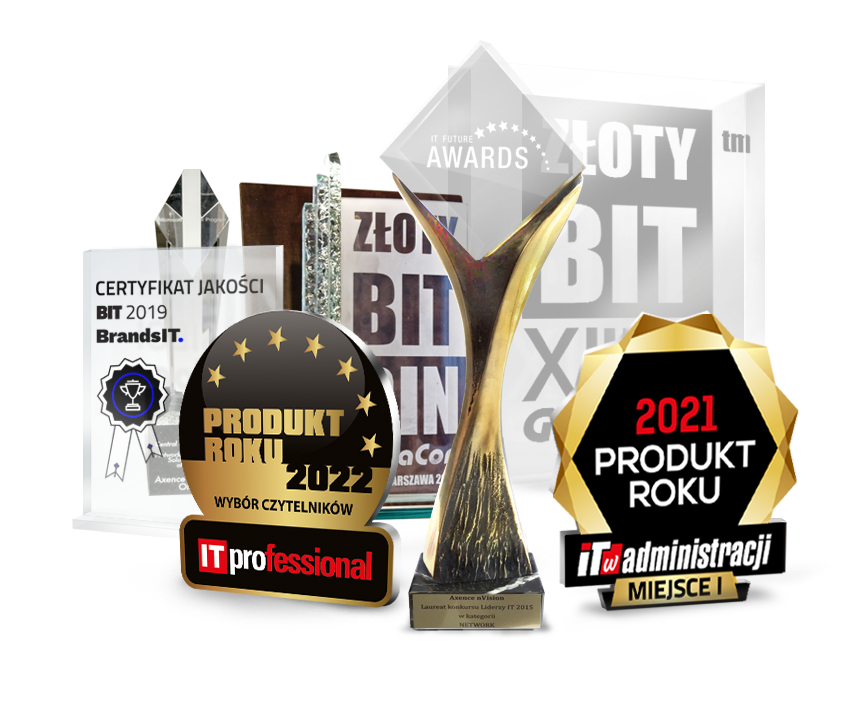 12/10/2020The launch of the 12th version of Axence nVision® in which the most important new feature is AdminCenter – the functionality which allows an IT command and management center to be created in your organization.

AdminCenter allows you to create your own interactive dashboards in your web browser where key parameters and events in the IT network can be shown live. Not only can the data be viewed on computer screens, but also on large TV screens and slide projectors.

03/11/2020 Axence nVision® 11.5 introduces crucial changes in the Inventory module, making it cutting-edge IT Asset Management (ITAM) and Software Asset Management (SAM) tool. It enables to easily store and contol all devices, documents, software licences and other IT assets in one place.

09/29/2020The next major update to Axence nVision®. This time, there are major changes in the HelpDesk, which has been provided with a new automation mechanism, visibility management tool, and many other innovations and improvements.

For detailed information on changes in version 11.9, please visit: https://axence.net/en/nvision11-9

09/01/2020Axence becomes the founding member of the first Polish cluster of cybersecurity companies – #CyberMadeInPoland. For more information, please visit: cybermadeinpoland.pl.  The purpose of this cooperation is to form and develop safe cyberspace in Poland and to promote Polish companies abroad. We are starting cooperation with business, government administration and foreign partners. A representative of the company has joined the Cluster Board and we undertake to coordinate the cluster projects.

02/01/2020Axence celebrates its 15th anniversary. During that time, Axence nVision® has become a comprehensive multi-module IT management software used by thousands of organizations both in Poland and in the far-flung corners of the world. We would like to thank all of our customers who have trusted us and created this history together with us.

10/15/2019 Launch of Axence nVision 11 and the new web-based SmartTime module for business applications to help better manage the work time thanks to employee and team activity indicators.

05/15/2019 the “AxencePartner Day” conference at the National Stadium combined with the release of the “Masters of the Web” Report of the Nationwide IT Administrators Survey conducted by Axence. The first Axence expert report has been widely received in the national and professional media. It is also the first-ever conference dedicated to Axence Authorised Partners.

05/13/2019 Release of version 10.5. geared towards strengthened security in IT management.

04/01/2019 Axence represents Poland at the National Stand during the Hannover Messe Fair as one of 20 innovative Polish companies.

03/19/2019 The "AdminDays" cycle, a new format of educational meetings for the community of IT administrators, has started. Axence invited experts from the cybersecurity and IT management sector to work in cooperation.

11/27/2018 Axence nVision 10.3 is released with special attention to user comfort and security.

12/02/2016For the fifth time in a row Axence nVision® is awarded with the Product of the Year title by the readers of IT Professional magazine.

10/11/2016 The release of Axence nVision® 9, including extended reports in the HelpDesk module, substitution calendar and management of software installation from the nVision console. It is also the moment of a significant shift in licensing policy. The FREE/PRO versions are giving way to free, fully functional licensce for up to 10 Agents.

12/02/2015 For the fourth time in a row Axence nVision® is awarded with the Product of the Year title by the readers of IT Professional magazine and ranks 2nd in the contest in the IT in Administration magazine.

06/29/2015 Premiere of Axence nVision® 8. We introduce a knowledge base, ticket categorization and e-mail integration in the HelpDesk module, refresh the interface, Android device inventory, and many other new features and improvements.

06/11/2015 Axence nVision® awarded with 2015 IT Leader title in the NETWORK category at IT Future Expo trade fair.

02/01/2015 We set out for our first longer trip to USA as part of the Silicon Bridge program. We are looking for partners, participating in conferences, talking to investors. This is the beginning of the expansion of Axence in the United States.

12/17/2014 For the third time Axence nVision® is the IT Professional Product of the Year in the Monitoring/Management category.

10/06/2014 The RoadShow starts – a series of free training sessions on IT infrastructure security, organized by Axence in cooperation with Bakotech, SpamTitan and Webroot.

05/30/2014 Axence Revolutions! The release of a new, free edition of Axence nVision® Free and nVision Pro 7.5, the rebranding of Axence, and a new website. We also introduce Axence Account.

02/05/2014 Axence nVision® for the tenth time is chosen as the best solution of GigaCon conference and receives another Golden BIT Award.

12/02/2013 Axence nVision® gets the 2013 Product of the Year title from the readers of IT Professional magazine in the category: Monitoring/Management, and Axence NetTools – in the category: Utilities.

07/03/2013 The release of Axence nVision Starter – the first free version of the software.

01/01/2013 Axence is dynamically growing: within a single year the number of employees is doubled, the company’s expert position in the sector is strengthened.

12/03/2012 Axence nVision® gets the 2012 Product of the Year title from the readers of IT Professional magazine in the category: Monitoring/Management.

04/06/2012 The release of version 6 of Axence nVision®, strongly integrated with Active Directory, and the premiere of the new Axence website.

03/10/2012 Axence at the international CeBIT Fair in Hannover for the first time.

06/05/2011The release of e-service Axence Cirrus performed under the framework of the EU project Innovative Economy.

10/26/2010 The release of the groundbreaking version Axence nVision® 5, which set out the new quality and functionality standards in the network management software market.

06/13/2008 Axence nVision® is awarded with a distinction in the Microsoft Poland “Application of the Year 2008” contest.

05/05/2007 The first implementations of Axence nVision® in such renowned companies and organizations as: US Air Force, NBC Universal, Nestle.

01/31/2007 The release of the first version of Axence nVision® (under the name of NetVision); the software, by its dynamic development, gained fame as one of the most innovative and comprehensive solutions for the management of IT infrastructure available on a global market.

05/18/2005 The release of the first Axence software, network diagnostic utilities: Axence NetTools, which quickly won worldwide popularity and until now – presently as a fully free solution – records a few thousand installations each month.

Axence and its providers use cookies and similar technologies to provide the users with greater comfort of use and analyze their interactions with our websites, products and services. We also use them to ensure better search for information, as well as in advertisements on this and other websites. If you agree, click on the “I agree” button. In order to limit the sharing, click on the link to adapt the settings. You can change the settings in the website footer at any time.
I accept Adapt settings

If you allow us to collect cookies, we will be able to analyze traffic on the website, and thus create a website that is convenient to you and where you can easily find the information you need. These data will only be used for internal purposes of Axence.

They are always enabled because they allow the basic operation of the Axence.net website

If you allow us to collect cookies, we will be able to analyze the traffic on the site, and thus create a website that will be convenient for you and on which you will easily find the information you need. This data will be used only for Axence's internal needs.

We use tools for counting, tracking and analyzing visits. This will help us understand how users use the site and where we should make improvements.